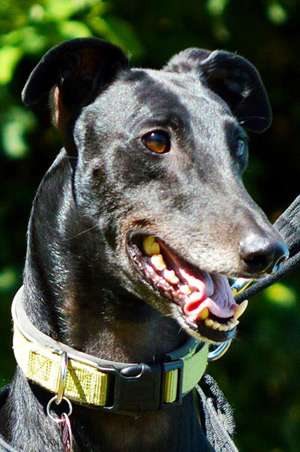 When my greyhound, Speedy, came to me, he was understandably stressed and ‘closed-up.’ I’d never had a dog who was so uncommunicative at first. I suppose he knew nothing of life except for the kennels and racetrack.

Going into the street was nerve-racking for him. He would freeze in terror at some strange sight or sound; he simply didn’t know what to do. So he froze. Or he would react to other dogs by growling, lunging and barking, which made me very nervous as he is 35 kg. with an enormous starting power.

I put him on two short leads to control him in case he took off. One lead on a harness, which I always use, and a slightly longer one loosely on a collar, just in case I had to turn him. Perhaps this helped him at first. He could follow me passively, except when he panicked and froze.
Speedy, summer 2013, 3 1/2 years old

It took him three weeks before he started even to sniff at the grass or to mark. To give him the space for this, I started handling Speedy on a long lead in a safe environment, supporting him in making choices, using the environment to give him reference points by which to orientate.  But for a while, I didn’t dare to use this long lead in the street because I didn’t feel I could control him if necessary.

A most moving experience was the turning point for us.
One day, the streets were quiet and I decided to go out with Speedy on the long lead. At some point, I had to turn back to go to the car, as I was a bit late for work. Speedy stood still and wouldn’t move. For some reason, he does not really like walking back the way we came. I stood by him and waited absolutely quietly, because I knew that hassling him would just make it worse. I gave him the choice: of standing there or moving forward towards the car.  We stood for a while.

And then suddenly, he looked up at me. It was his first clear communication initiative ever. It was as though he wanted to say, “You’re asking me, aren’t you?”

Exchanging control for cooperation
I realized that freezing with fear was a symptom of his intense loneliness.  It had never occurred to Speedy that someone would ask how he felt, look out for him or would be there to help him.  When he couldn’t cope, it didn’t occur to him to ask his person to help. He had been trained to be led passively, as most dogs are. What he thought and felt didn’t come in to it.

The downside of control is a passive dog who’s not allowed to think for himself and who may give up communicating. Many dogs live in this sad situation. They are so dependent on their owners that they are ill-equipped to make good decisions for themselves in social situations.  No wonder so many dogs make the wrong decisions at vital moments and then pay the price for them. ‘Bad dog.’

The lead as a means of dialogue.
From that day on, Speedy never froze again, although he may communicate to me that he has another opinion about where he’d like to go;-). Then we make compromises and get to where we´re going by using objects which help him on the way.  He rewarded me rapidly by communicating more about how he feels, when he is nervous, when he’s inquisitive about something. The more I relate to that, the more he’s prepared to follow me easily when I need him to. Give and take.

“Yes, Speedy, I’m asking you”
Speedy has understood that he is allowed to make decisions and I will support him with them. That moment on the street was our breakthrough to a rewarding relationship based on trust and communication. And I’ll never forget it.

Since then, I’ve made this special lead training the core of my work in building trust, encouraging communication, developing social skills and a harmonious relationship between a dog and their person.

We use cookies on our website to give you the most relevant experience by remembering your preferences and repeat visits. By clicking “Accept All”, you consent to the use of ALL the cookies. However, you may visit "Cookie Settings" to provide a controlled consent.
Cookie SettingsAccept All Read More
Manage consent

This website uses cookies to improve your experience while you navigate through the website. Out of these, the cookies that are categorized as necessary are stored on your browser as they are essential for the working of basic functionalities of the website. We also use third-party cookies that help us analyze and understand how you use this website. These cookies will be stored in your browser only with your consent. You also have the option to opt-out of these cookies. But opting out of some of these cookies may affect your browsing experience.
Necessary Always Enabled
Necessary cookies are absolutely essential for the website to function properly. These cookies ensure basic functionalities and security features of the website, anonymously.
Functional
Functional cookies help to perform certain functionalities like sharing the content of the website on social media platforms, collect feedbacks, and other third-party features.
Performance
Performance cookies are used to understand and analyze the key performance indexes of the website which helps in delivering a better user experience for the visitors.
Analytics
Analytical cookies are used to understand how visitors interact with the website. These cookies help provide information on metrics the number of visitors, bounce rate, traffic source, etc.
Advertisement
Advertisement cookies are used to provide visitors with relevant ads and marketing campaigns. These cookies track visitors across websites and collect information to provide customized ads.
Others
Other uncategorized cookies are those that are being analyzed and have not been classified into a category as yet.
SAVE & ACCEPT